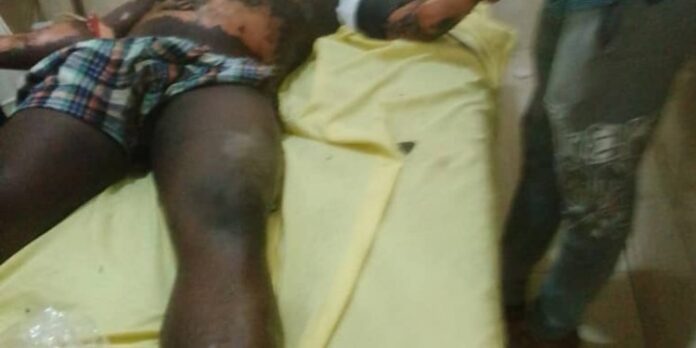 A man in his 30s identified as Kwabena Nnede popularly known as T.K was rushed to the St. Francis Xavier Hospital intensive care unit after being electrocuted but was later referred to Komfo-Anokye Teaching Hospital in Kumasi for further treatment.

The victim is said to be an NPP Polling Station Executive who doubles as a plumber and was hired to fix a fault on a Poly Tank situated on a storey building under an electricity high tension pole at Assin-Fosu in the Central Region.

In the course of his work, the victims got contact with the high-tension cables and subsequently got electrocuted. He landed flat on top of the roof and smoke was all over his body.

The timely intervention of ECG officials and the Fire Service personnel from Assin Fosu saved him.

Meanwhile, the officials of the Electricity Company of Ghana(ECG) had earlier warned the encroacher who is the Assin Central constituency Women’s Organizer of the NPP to stop putting up the second floor since it interferes with their operations and poses a great danger to both human lives and properties. Should any of the distribution lines drop, or facilities develop a fault. But the owner spurned the call and was however given the green light by the physical planning officers of the municipality.

The Assin Fosu Divisional Fire Officer, DOIII Paul Tawiah advised the citizenry to cooperate with institutions to work perfectly to avoid such an unfortunate occurrence.