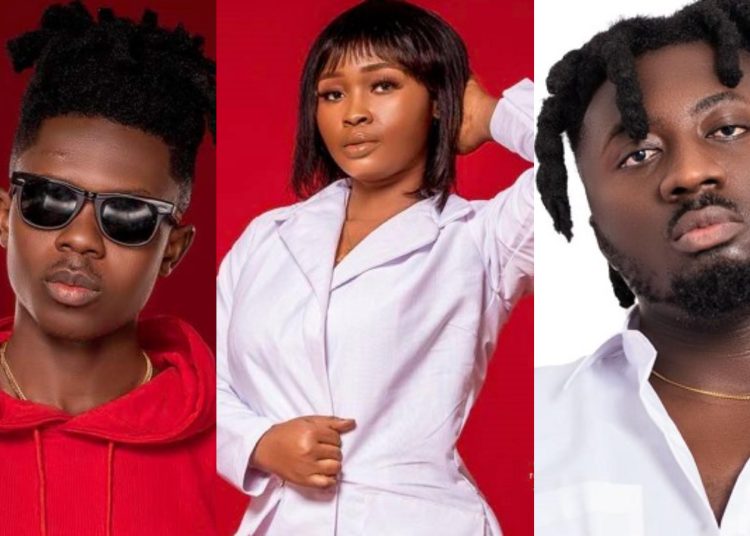 Amerado has spoken to Poleeno about a statement Strongman made recently about him.

Strongman said that his girlfriend had asked him not to respond to Amerado’s shades.

He says his girlfriend has warned that if he stoops low to give Amerado attention, she would pack her things out of his house.

Speaking on Angel FM in Kumasi, he further stated that when the time is right and his fans ask for a rebuttal, he wouldn’t hesitate to fire back.

In recent times, Amerado has been throwing shots at a number of MCs, including his Mic Burners family member, Strongman.

In his ‘Obiaa Boa’, he made an allusion to someone being a pet to a certain Mike. Music buffs have inferred that the line refers to the days Strongman served under Sarkodie’s record label.

The rapper also added that beef songs are served hot. Once the fire dies down, the motivation to fire back is low.

Amerado admitted during his interview with Poleeno monitored by ghanaweekend.com that he truly threw subliminal punches at Strongman, but that is just for the craft and that he did not think it was necessary for the SarkCess Music signee to take it to radio interviews.

“If my wife advises me in private, I won’t make it public. She must have a great love for me to give me counsel in private. If I was not a wise person, you would just have set your wife up [for insults],” he said while making reference to Strongman’s statement.

“You’re not even married to her, by you call her your wife,” Amerado quipped.

He, therefore, doubted if Strongman has achieved greater feats in the music industry than he has. He said he respects Amerado as someone who is older than him and started music before him, but since they are in a competitive, overtaking is allowed.

He further noted that Strongman, by responding to his rap jabs in his radio interviews, gives his ‘wife’ a reason to leave him, if he claims she really said gave him that advice.