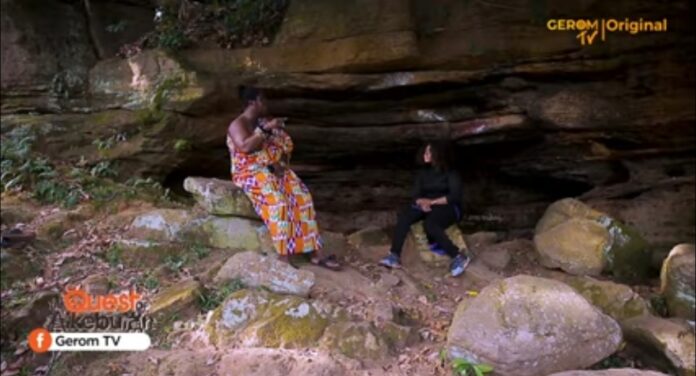 Maame Grace has taken an expedition to unravel a mysterious cave located at Nsuta in the Ashanti Region, where many Ghana gospel musicians and pastors, reportedly, go for rituals and charms to get multitudes to accept their message and songs.

The shocking revelations were made by the Okomfo of the area, Nana Sayana who was serving as the tour guide and spiritual mouthpiece of the gods in that district.

According to Nana Sayana, many Ghanaian gospel singers come over to pour libation and do rituals to get hit songs.

The hidden cave is filled with extraordinary chambers and has many pillars that are believed to belong to dwarves and spiritual entities.

“Before you get to the core of the cave inside the deeper part of the cave, you have to bend down and it opens to a wider hall. It’s beautiful rock mixed with the river to create humongous halls of different chambers”

The flow of the cave has leftovers sacrifices and drinks as well as gold. — Maame Grace opined.

To Maame Grace, she believes the cave can be enhanced and rehabilitated into a tourism destination.

The expedition is part of GEROM TV’s new docu-series with Maame Grace called “The Quest of Alkebulan”, that’s taking their entire production team on tours to spiritual and cultural locations across Africa to learn about ancient original arts and objects of spirituality.

Series of the Quest of Alkebulan is available for free viewing on YouTube via the Maame Grace channel.

US AMERICAN LOTTERY!! WAYS TO FIND A HOST *APPLY NOW*