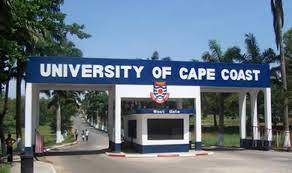 The Students’ Representative Council (SRC) of the University of Cape Coast has debunked claims of a stabbing situation on the University campus and has called on students to disregard any of such information.

This comes after the SRC described as false and fake, video circulating on social media indicating that a female student of the University has been stabbed to death by armed robbers.

According to a release issued by the Public Relations Officer of the UCC SRC on September 29, 2022, no such incident has been recorded on the University’s campus and surrounding communities since various security measures have been put in place by the dean of student affairs and the SRC.

The release stated that “the SRC has beefed up security by adding fifty-five more watchdogs to the existing security personnel of the University ….so far thirty-five (35) watchdogs have been deployed to Amamomma, Kwasipra, Apewusika, and Ayensu Communities.” 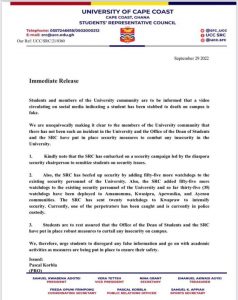 President of the UCC SRC Samuel Kwabena Adotei spoke to ATLFM NEWS and said the purported stabbing incident has been connected to a past attack on a student which has already been resolved.

“A lady’s wrist was cut when she was attacked last Thursday (22nd September 2022) on the Amamoma stretch around 11:30 pm. We had to rush her to the hospital and surgery had to be done on her wrist. Thankfully she is alive.  So there were connecting that video of stabbing to the lady. So I had to quickly let those who have posted the fake video understand that the lady is alive” he said.

Meanwhile the Dean of Students’ Affairs at UCC, Prof Eugene Marfo Darteh has assured students that management of the University is on top of security issues and has put in place measures to safeguard their security on campus.

He however called on hostel managers around the university to show concern for the students who reside within their premises.

“None of these burglaries or attacks have happened in any of the big hostels. It is these little ones whose owners have proven difficult to come close to us. A semester ago we invited all of them to give us security men who were going to train at our own cost to help manage the hostel but none of them brought these men.” He continued.

He further urged the perpetrators of the false video circulating to stop such acts as it destroys the image of the University.