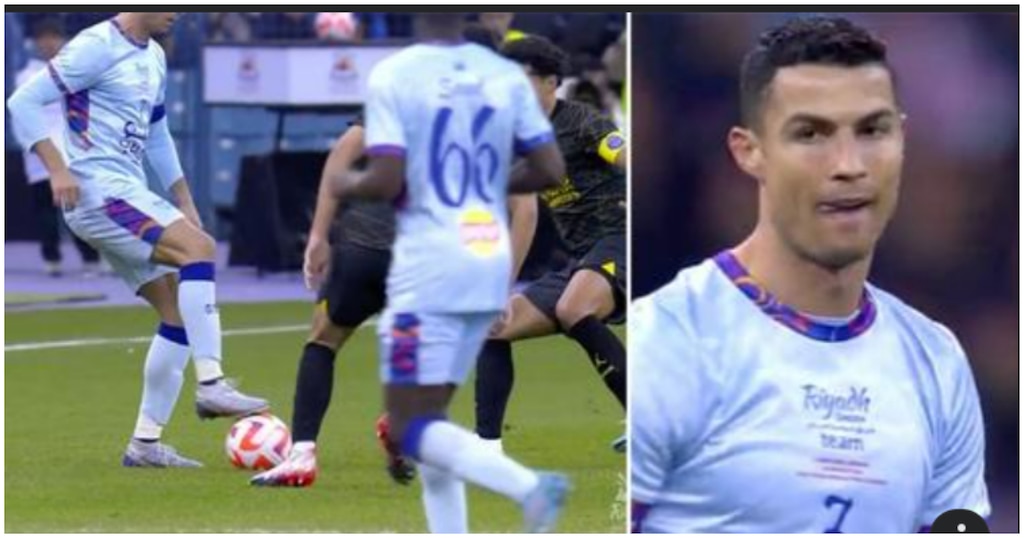 Cristiano Ronaldo has demonstrated he is one of the most skilful players in the world in the professional game The Al-Nassr forward produced a filthy nutmeg on PSG midfielder Carlos Soler during a friendly game It was Ronaldo’s first game on Saudi soil since joining Al-Nassr from Manchester United. Christiano Ronaldo struck again as he pulled off an incredible piece of skill during Riyadh XI’s clash against Paris Saint-Germain on Thursday evening. The 37-year-old produced a moment of pure magic in the first half at the King Fahd International Stadium in Saudi Arabia.

With Ronaldo receiving a pass from his teammate in the 10th minute, Soler tried to close down and block him from initiating an attack.

But the Spaniard left a clear gap between his legs, which the Real Madrid legend utilized to devastating effect.

Ronaldo scores brace against PSG Ronaldo responded to Lionel Messi’s opening goal with a quickfire brace in an enthralling exhibition game staged at the King Fahd Stadium. In what was Ronaldo’s first game on Saudi soil since joining Al-Nassr the Portuguese superstar stole the headlines with a first-half brace.

Ronaldo scored a penalty just after the half-hour mark before pouncing on a rebound to level the game for the second time in the game. Ronaldo and Messi meet again Sports Brief earlier reported that the much-vaunted exhibition game between Paris Saint-Germain and a select side from Al-Hilal and Al-Nassr has dominated the headlines throughout the week.

The discussion has centred on perhaps the last match-up between Cristiano Ronaldo and his eternal nemesis Lionel Messi. Despite the rivalry between the pair, both Messi and Ronaldo have nothing but respect for each other, which manifested just before the kick-off.