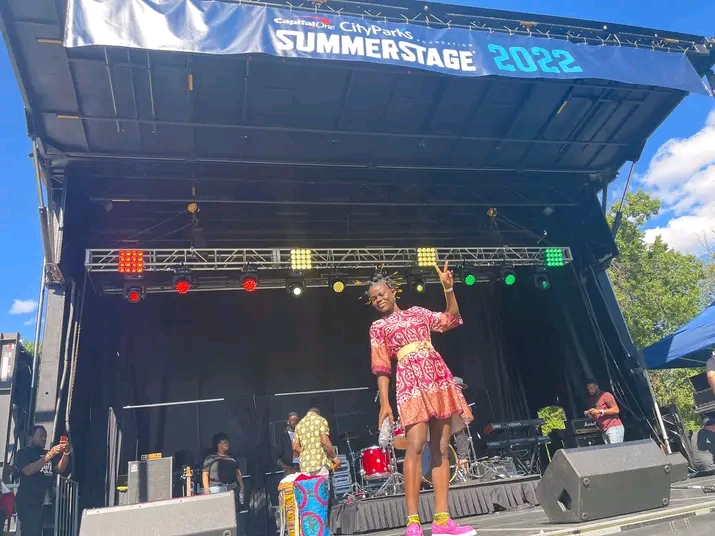 SummerstageNYC is an event recently held at New York City with 2 Ghanaian artistes billed to perform namely shatta wale and wiyala. The organizers promised to give award and citation to each art.

According to Team Wiyaala, a source told her Team shatta wale blocked her from receiving her award and citation. This made her angry and refused to take neither the award or the citation.

At approximately 6pm 13th August, Wiyaala was advised that she and Shatta Wale would be presented with a Citation of Merit by Vanessa L Gibson, President of The Bronx Borough on stage during an interval in his performance at @SummerStageNYC
At about 8.15 pm Shatta wale’s performance was paused and Council Member Vanessa L. Gibson and Wiyaala went to the back of the stage for the presentation of the citations. Vanessa went forward to do the presentation whilst an unknown person advised Wiyaala to wait. The presentation was made to Shatta Wale.
Vanessa then immediately vacated the stage without calling Wiyaala forward. Wiyaala was then told she could receive her award back stage out of sight of the audience. Wiyaala refused to accept the award under these circumstances and left Crotona Park for her hotel.
Vanessa was challenged by members of Wiyaala’s team as to why she had not been called forward to receive her Citation
On stage. Initially Vanessa blamed the organisers (SummerStage NYC), but eventually said that she had been blocked from calling Wiyaala forward by Team Shatta Wale.
Wiyaala does not accept awards or citations from any organization backstage.
Wiyaala respectfully requests that Team Shatta Wale confirm if they did block Wiyaala coming on stage to receive her citation at the same time as Shatta Wale. And if they did no such thing, then Vanessa L Gibson should account for why she disrespected Wiyaala in this manner on a night of supposed unity and mutual support.
Unless acceptable and credible explanations are forthcoming, Wiyaala has no intention of accepting the Citation of Merit supposedly awarded her by the Bronx Borough.
This is what happened and we now move on. Cased closed, good night #Roarrrrrr 🦁🌍🦁✌🏾